As most of you know by now, Reba has been diagnosed with stage 3 intermediate neuroblastoma cancer. We are hoping that this blog will help us convey to you her most recent medical updates and also provide a way to document her journey through this most surreal experience.

Reba was days away from her 6th month routine immunizations when she started having symptoms of gastrointestinal discomfort, to be brief. We took her to the on-call pediatrician and they told us she most likely had a stomach bug. They said to give her some probiotics and that she should be back to normal in a few days.

A few days later we brought her in for her scheduled immunizations. Her pediatrician, Dr. Parello, thought she looked a bit pale and was concerned due to the reasons for our visit a few days prior. She had us hold off on the immunizations and sent us to our local hospital for some blood tests. Those blood tests revealed that Reba’s hemoglobin levels and albumin protein levels were significantly lower than normal. She told us that she wanted us to go to Stanford to meet with some gastrointestinal specialists.

The doctors decided that Reba’s situation was concerning enough to have us stay the night at Lucile Packard Children’s Hospital at Stanford. Their plan was to monitor her hemoglobin and protein levels and see if they went back to normal.

The next morning at the hospital, Dr. Bass, the attending G.I. physician, told us he wanted to do an endoscopy to see if anything looked abnormal. But before he did that he wanted Reba to have an ultrasound of her abdomen. The ultrasound exam took about an hour and a half and that’s when they first discovered a mass near her liver. At that point they decided not to pursue any more G.I. tests or procedures and transferred her to the care of the oncology department.

Reba had to be under general anesthesia to make sure she didn’t move during the exam. After they saw the MRI results, the doctors explained to us that the mass was about 10 cm and most likely was neuroblastoma. It also revealed that the tumor was pushing against her liver and was surrounding blood vessels, making it very difficult to surgically remove. While she was under general anesthesia, she also had a CT scan to check her lungs for tumors. They did not find anything abnormal, so that was a relief. Reba’s hemoglobin levels had been routinely low up to this point but dropped to 6.7g/dl the after her MRI (normal levels are around 11-14). Her doctors ordered her first blood transfusion that evening and the following blood test showed that the level was back up in the normal range. She also became less tired and her skin color came back too.

In order to confirm the neuroblastoma diagnosis the surgeons did a biopsy of the tumor. During the same operation they took a biopsy of her hip bone marrow and also placed a port in her chest, which would make it easier to draw blood and give blood products and medications in the future. The bone marrow biopsy came back negative for tumor cells; more good news. She was given morphine to help with the pain, but after about 24 hours, they gave her a prescription for oxycodone and we gave it to her as needed.

During our one-week stay at the Children’s Hospital Reba had her blood tested once or twice a day. The second day after her surgery, she was given an albumin infusion, which would help her process fluids and reduce the puffiness in her legs and stomach. After that, her doctors told us that she seemed stable enough to go home.

We went back to LPCH for a radioactive isotope injection for her MIBG scan, scheduled for tomorrow. Neuroblastoma tumors will take-up the isotope and the scan will show other tumors in her body, if any.

The MIBG scan revealed that there is only the one mass in her abdomen! Finally some good news! Reba did so well during the scan- that was her third time under general anesthesia. When she woke up, she was a little disoriented, but after about 60 seconds, she was smiling and laughing.

The tumor biopsy had been sent off to be analyzed by multiple doctors. The world expert on neuroblastoma, Dr. Shimada, at UCLA, was one of them. According to his findings, the cells around the tumor are healthy, and are considered “favorable histology.” The MYCN gene was found to not be amplified – also great news (this means it is not ‘high risk’ neuroblastoma). The last test we were waiting on, the genetics test unfortunately came back as unfavorable. At this point our doctors decided to start with chemotherapy. The plan is to do 4 cycles of chemo, each cycle being 3 weeks long, and hopefully that will be enough to shrink the tumor enough to remove it, or the cells may “mature” and stop multiplying.

Chemotherapy day 1. Reba was given Carboplatin and Etoposide on the first day. We (her parents) were more nervous than she was. Reba was her usual happy self, smiling at everyone and being as sweet as can be. We were able to hold her during the whole process. 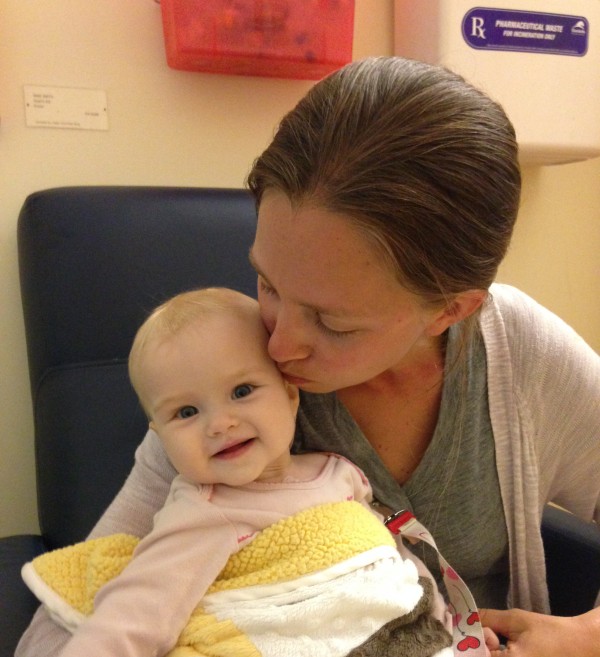 Chemotherapy day 2. Reba was given Etoposide on the second day. She was nauseous and tired- they gave her Zofran for the nausea and sent us home with Zofran to give to her as needed.

Chemotherapy day 3. Reba was given Etoposide on the third day. Nauseous and tired, but so glad to be done with round 1!

Back to LPCH for a neulasta injection- which promotes the production of white blood cells. Luckily it was a quick poke and got to go home right after.

Reba’s hemoglobin was low enough today for Dr. Mavers to be concerned. She had her second blood transfusion.

An at-home nurse came to our house for the first time today to draw labs (take blood.) It was a nice change to not drive 2 hours each direction to the hospital! Her platelets were very low and we were sent to our local hospital for a platelet infusion. We were at our local ER for 9 hours! At our next appointment at LPCH we begged them to please let us do the long drive to Stanford, in the future, for any blood products needed! It’s worth the drive to be in a top-notch facility!

We took Reba to her weekly blood draw and appointment with Dr. Mavers. Her levels are all starting to come back so chemotherapy session 2 is scheduled for May 6. Because her albumin is still very low, Reba will get an albumin infusion on May 4th. Reba had a heart ultrasound and a hearing test today also. Some of the chemo can affect the heart and hearing so it’s important to get a base-line. We are all trying to stay positive, strong, and upbeat for Zoe and Reba. Reba is amazing and teaches us constantly to live in the moment.